So if you’re a Roman or a Crusader or a Mamluk, deciding to conquer some Apollonia real estate is a no brainer.  Not necessarily for the access to the sea or its strategic location on the coast, but mainly for the gorgeous front row view of the Mediterranean in all its glory.  Beach property at its best! 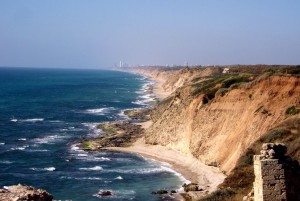 The gorgeous view north from the Crusader castle. The city of Natanya is visible in the distance

The first settlers on this site were the Phoenicians  (c. 600 bce) who named it Arsuf, after Reshef, their god of war and storms.  Their main occupation was fishing for that strange marine mollusk from which they produced purple dye.  Who comes up with these things? Can you imagine that first Phoenician who crushed a poor snail’s shell to little, tiny, itsy bitsy bits to make a dye? What was he thinking?

That little murex snail made the Pheonicians a lot of money and financed much, much travel. They were superb navigators and used Arsuf as one of their many posts on the coast of the Mediterranean. 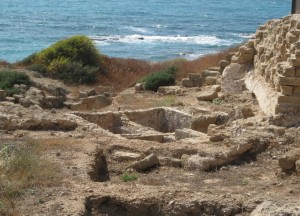 Remnants of a fancy Roman villa in town. Talk about a view!

When the Greeks arrived (400-100 bce) they renamed the town Apollonia, after  Apollo and in keeping with the theme of gods of sky and storms.  The Hasmoneans followed and then the Romans and the Byzantines. By now, Apollonia was the main port city of the Sharon Plain.

However, the most magnificent archeology left at Apollonia today is that of the Crusaders, who conquered the area in the spring of 1101 ce. They renamed the city Arsour, (a mispronunciation of the Phoenician/Arabic name Arsouf. 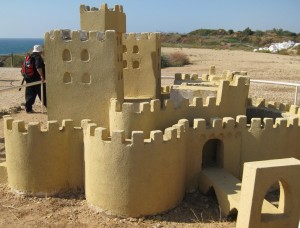 A reconstruction of the Crusader Fortress at its best

In 1241 ce the Crusaders began construction of a a fortress in the northern part of town, a magnificent structure with moats and double defense walls and the works.  For 24 years it stood tall, until the Mameluk Sultan Bibars decided he wanted this real estate for himself.

He lay a 40 day siege on the town before it fell.  Bibars then ordered his forces to fill the fortress moat with wooden logs, brought a ramming machine up to the walls, and constantly bombarded the fortress with cannon balls. 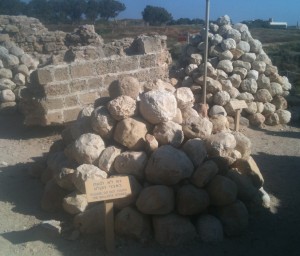 This ballistic diversion gave the Mamluk soldiers time to sit under the covered ramming machine and carve out the stones at the bottom of the fortress walls.  When the stones were removed, the Mamluks lit fires in the wall openings and smoked the Crusaders out.

They had lasted 3 days. So much for a fortified, double walled fortress  😦

The Mamluks took prisoners, destroyed the fortress and it was never used again for military purposes.

Its so lovely. Certainly a beautiful place to visit and enjoy. 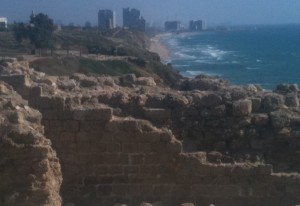 The view south from the fortress, with Herzliya, then Tel Aviv in the distance.