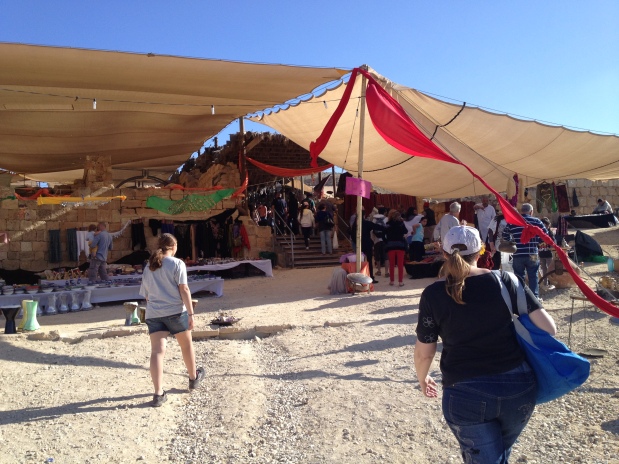 Funny how some Hebrew names just do not sound well in English. Take  for example the boy’s name Dror,  or the girl’s name Osnat, beautiful names in Hebrew, but in English? No.   Such is the fate of an amazing place in the northern Negev called Mamshit.

Let’s get one thing straight, it should have been transliterated to Mamsheet on all the English brochures, but go figure.  Guess no one thought of it.  Its actually pronounced Mamsheet…  you gotta ‘sheeeeet’ when you say it.

So now that we’ve got the  pronunciation right, let’s get to business.

When visiting the Negev, do not miss this gem! 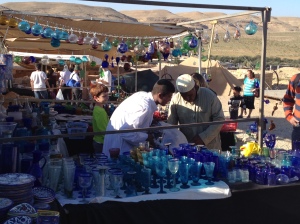 Mamsheet  (which is how I will spell it) is a beautifully restored ancient Nabatean city, that is not only a delight to visit because of its fascinating archaeology, history and architecture, but also because twice a year, during the 7 days long holidays of Sukkot and Passover, the ancient city comes to life with a fun, not-to-be-missed, ethnic,  Nabatean market… but first, a little history.

Mamsheet sits on the Nabatean Incense Route which ran from the southern Arabian Peninsula to the Mediterranean.  The Nabateans were masters of the desert, controlling the  important incense and spice trade routes from about the 3rd century b.c.e to the 3rd century c.e.  They accumulated great wealth as they transported myrrh and frankincense,  cinnamon and nutmeg, and other luxury commodities from the East to the shores of the Great Sea.  They built great desert cities, oases for their camel caravans,  not only in the Negev but also east of the Jordan River, with amazing Petra as their capital.

Mamsheet was built in the 1st century c.e. and was the only walled ancient city in the Negev, protecting its wealthy residents from nomadic intruders.

The Romans coveted this wealth and Emperor Trajan finally annexed the Nabatean Kingdom in 106 c.e., charging them high taxes and creating the province of Arabia Petraea.

By the 4th century and the start of the Byzantine era, the Nabateans had settled down,  developed unique desert agriculture techniques and began to breed Arabian horses. They eventually converted to Christianity and later, with the arrival of the Arab empires,  they blended into the local population and disappeared as a culture.

Although Mamsheet is the smallest of the Nabatean cities of the Negev, it has been beautifully  restored.

The city walls, one built in the 1st century and the second built by Emperor Diocletian in the 3rd century, still enclose the town. Today one can enter the city through its ancient gate.

Several of Mamsheet’s  streets have survived intact and visitors can enter rooms in luxurious homes, courtyards and even see troughs and stalls in the ancient horse stables.

There are two well preserved Byzantine churches in Mamsheet, exquisite

Walking through a beautifully restored Nabatean city is one thing, but visiting Mamsheet during  Nabatean Market Days is FUN!

Arts and crafts, pottery, ceramics, antiques and ‘not so antique’ finds, funky clothes, delicious food, colored glass, sand paintings, ethnic jewelry, amazing music… and all by authentic Nabateans! Well, maybe not Nabateans but a delightful mixture of artists of all backgrounds…

Usually on Thursday nights during Nabatean Market week, the market is open till the late hours of the night.  It is an absolutely enchanting place to be and an unforgettable experience.

So, come visit the Negev with me, and on our visit to Mamsheet, you can stay at their campground.  You may camp under the desert stars, sleep in lovely bungalows or large bedouin tents, stay in spacious, comfortable cabins, any way you want.  Camping in the desert sure adds to a wonderful experience…

When in Israel for the first time, or the second, or fifth, one tends to visit the same ol’ places: Jerusalem, Tel Aviv, Haifa, Safed, Caesaria… and there is nothing wrong with that. Great places, wonderful experiences.

However, I  invite you to begin exploring a truly extraordinary region, a desert  unique in its beauty, its geology, wildlife, history and increasing importance in facing today’s global challenges… the Negev.

Monotheism and the Jewish People were born in the Negev when Abraham chose to settle here so many years ago.  The Israelites wandered through on their way from bondage in Egypt to freedom in the Promised Land.  The nomads crisscrossed these rocky sands, so did the Nabateans with their incense-laden, camel caravans journeying from southern Arabia to the shores of the Mediterranean.  The Ancient Greeks, the Romans, the founding fathers of the early Christian Church, hermit monks in search of God… 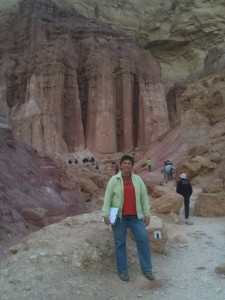 It is an arid and semiarid, rocky desert of  breathtaking beauty, incredible landscapes, fascinating ancient cities and archaeology, unique geological formations… but don’t only take my word for it.

Lonely Planet, the world famous travel magazine, picked the Negev as the second most desirable world region to visit for 2013. They write:

” Look closely between the rocks of the wadis (valleys) and you will find water and even wine. The Negev Highlands region is also home to so many vineyards that it now has its own wine route. Today, ecologists from all over the world come to the kibbutzim of Sde Boker and the Arava to study solar energy and water treatment. But this isn’t new. Two thousand years earlier, the Nabataeans cultivated grapes and practically invented desert irrigation, which can still be seen at the ancient ruins of Shivta, Mamshit and Avdat.

This region, comprising 62% of Israel’s land mass, may seem sparse but it offers a world of adventure, including mountain hikes, camel treks, 4WD desert drives and Red Sea diving. “

In the next few posts I will introduce you to some of my favorite sites in the Negev.   Stay tuned…